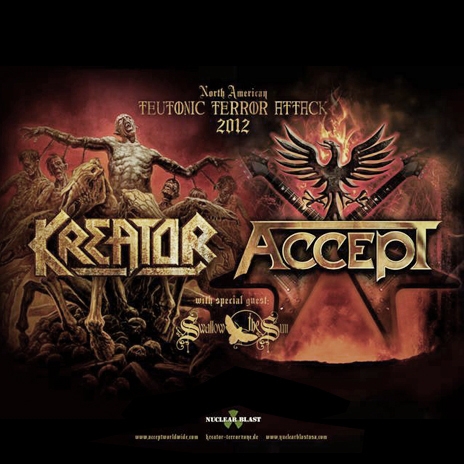 Two dynamic German forces have merged to co-headline a North American Teutonic Terror Attack in the most high-powered touring bill of 2012: KREATOR and ACCEPT.Opening the 23-show trek through the U.S. and Canada will be Finland’s Swallow The Sun. The follow-up to 2009’s Hordes Of Chaos, KREATOR’s new album, Phantom Antichrist, is slated for North American release on June 5th. In April, Stalingrad – ACCEPT’s follow-up to their 2010 comeback album, Blood Of The Nations – rode the tsunami of their resurgence to a Billboard Top 200 debut at #81.Check all Dates and tickets information for the ACCEPT / KREATOR Teutonic Terror Attack 2012 on the TOUR LINK.Exclusive internet pre-sale tickets are available online at EnterTheVault.com through May 26th; afterwards, tickets will be on sale through all normal ticketing outlets.