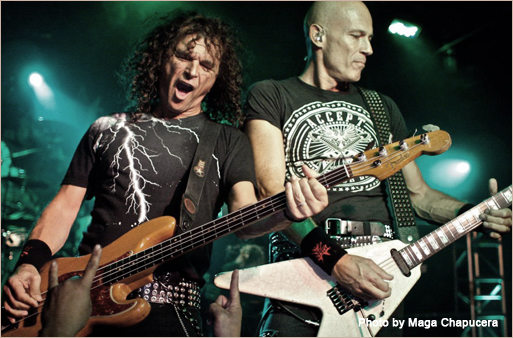 Back in ’84, I saw ACCEPT open for KISS at the Montreal Forum and I thought it was good. In 2011, I saw the band at Club Soda in Montreal and thought they were great, but it was nothing like last night’s show (Sept 10th 2012) at Le Metropolis (in Montreal). The band was simply fantastic. One of the better shows I’ve seen this year. ‘New’ vocalist Mark Tornillo has added a spark to the band and has re-energized the old catalogue. Songs like ‘Restless And Wild’, ‘Losers And Winners’ and ‘Metal Heart’ sound fresh and powerful with Mark’s growl and how is it when speaking of guitar gods – does Wolf Hoffman get overlooked? He was blazing last night. The band also featured songs from their latest two albums (2010’s ‘Blood Of The Nations’ and 2012’s ‘Stalingrad’). ‘Teutonic Terror’ is by far their greatest song ever and to hear it live is simply killer. The band also treated fans to newer tracks ‘Hung, Drawn and Quartered’, ‘Pandemic’, ‘Bucket Full Of Hate’ and ‘Stalingrad’. It’s not often a band can change their lead singer and actually become a better band, but ACCEPT have done it and prove it without doubt at each live show. I’ll be coming back every time they’re in town. Oh, yeah – they also played their greatest hit ‘Balls To The Walls’ and yes, it had MORE BALLS with Tornillo singing! Thanks ACCEPT for another great show!