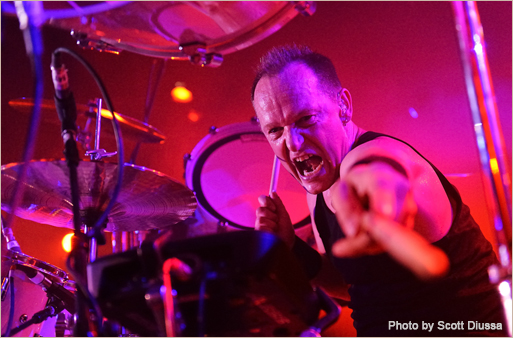 Accept hit the stage and blasted into “Hung, Drawn and Quartered” off their 2012 release Stalingrad. Immediately it was obvious this was going to be a special night. There are a couple of aspects of an Accept live show that make it an experience to not be forgotten. First you have the music; straight up Heavy Metal – the new music is as good as the classics – every tune rocks!! Second you have the stage presence – not many can hold a candle to Accept. From Wolf Hoffman’s, Peter Baltes and Herman Franks’s constant smiles, frequent in-unison head-banging and in-sync guitar/bass motions to Mark Tornillo’s electrifying vocal delivery there isn’t a dull moment during their performance.
The band played a perfect mix of classic Accept songs along with soon to be classics from their 2010 comeback album Blood of the Nations and four songs from their 2012 release Stalingrad. It’s hard to believe that Accept has been around since the early 80’s by watching their performance – the energy delivered in their current show rivals that of their younger days. Proof is in guitarists Wolf Hoffman’s guitar solos and the fact that this guy cannot stand still for more than 5 seconds . . . He is without a doubt the king of silly guitar faces.

Longtime fans seem to have welcomed vocalist Mark Tornillo (replacing original vocalist Udo Dirkschneider) with open arms based on the crowd reaction to songs new and old throughout the night. Highlights included “Stalingrad”, “Teutonic Terror”, “Fast as a Shark” and the last song of the night, a fantastic version of their biggest hit “Balls to the Wall”. Accept delivered an epic night of Heavy Metal to the lucky fans in attendance . . . 80 minutes of music to warm your Metal Heart!!