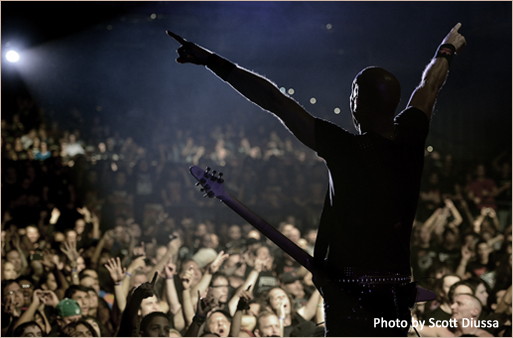 Review of ACCEPT concert from Bucharest by Ana-Maria Gavrila (metalhead.ro) – ACCEPT hit the stage for a royal Teutonic Metal oriented somewhat around “Stalingrad”. True, new songs can be as well received as those well known – are still in a promotional tour. Influenced by events in the history of the Soviet Union, war, hell social realities and rebel attitude that time, the concept is not necessarily one unusual (although I do not remember any other band so explicitly addressing this topic) and accept managed to create an album whose compositions are fantastic consistency – nothing seems exaggerated, resulted in extremely lyrics are inspired interpretation of Mark Tornillo – exemplary.
That happened on stage: Germans have maintained an atmosphere full of energy throughout the concert, since chaotic with two new songs “Hung, Drawn and quartered” and “Hellfire” guitarist Wolf Hoffmann while and has demonstrated skill, making all sorts of theatrical motion without even a moment to look at the neck, and Mark Tornillo interpret old songs with confidence in his own talent. I do not think I felt any moment need to make comparison between his style and that of vocalic Udo Dirkschneider – If “Losers and Winners” simply electrified the audience, “Princess of the Dawn” sounded undeniably brilliant.
And if I said above that they maintained a crazy atmosphere is because, during the concert, I had the feeling that most of the fun takes place – well – on stage, as the Germans would have been delighted to was on stage in Bucharest, playing in front of several hundred people. Few bands so easily transmit this feeling and this is felt in the reaction of those gathered in front of the stage.

When energy spreads in both directions have resulted in a successful evening: a game between the old and new of the Teutonic Metal from ACCEPT audience attitudes he left out “tough” by metalheads upset, even if you may need a circle pit . I’m glad the second night of Chaos Venue, a metal weekend proved to be one awesome: I accept put their heart and soul into the show and it was felt the most.