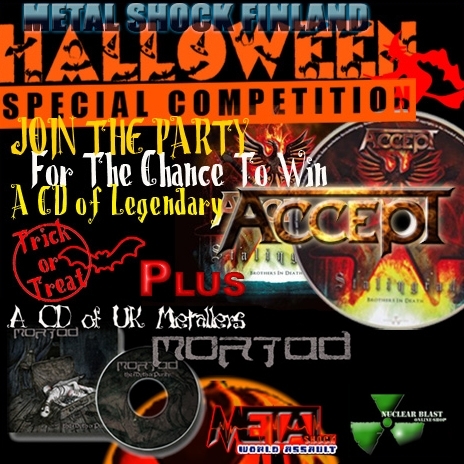 Metal Shock Finland are proud to announce a Special Halloween Competition for all Metal Shock Finland readers. Join our Halloween party where you can have the chance to win a CD of the latest album of legendary heavy metallers ACCEPT plus a CD of the newest album, “The Myth Of  Purity” by UK metallers MORTAD. The competition will close at midnight on Halloween and the winners will be announced on the Metal Shock Finland website and official facebook page. If you want to be a winner, you just need to write a brief description of “What Halloween means to you?” So fill in all requested details on this links.      Legendary Teutonic heavy metallers ACCEPT released their newest masterpiece album, “Stalingrad” in April 2012 via Nuclear Blast Records. The new songs still capture that great classic ACCEPT sound. The band are currently on their European fall tour and they are seriously shaking the ground with their metal awesomeness.      To know more about ACCEPT tour dates click here. UK metallers MORTAD released their debut album “The Myth Of Purity” earlier this year with producer Russ Russell. The album received rave reviews and was supported by a recent successful UK tour, which gained many new fans. MORTAD have already begun working on a new album, so stay tuned!