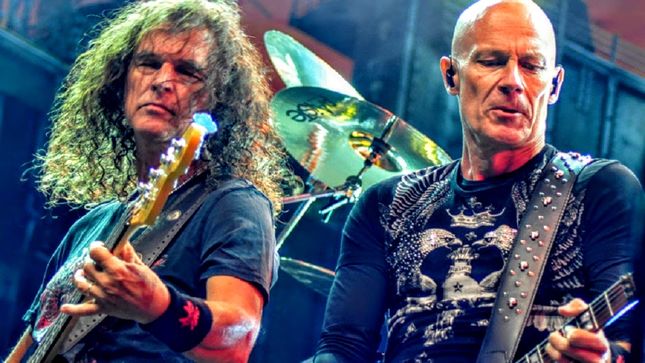 Final band of the night/festival, for all but the most drunk (and boy, there a few!) is Accept. May have been ages since more than a few one-off North American shows, but the band have been killing it on the continent. “Live By The Sword” has entrenched itself as the opener, a much more active Mark Tornillo interacting with guitarist Wolf Hoffman, right from the start. The singer visits the other side of the stage, alongside guitarist Uwe Lulis, during a green lit “Stalingrad”. Hoffman is alone, center stage, for the telltale riffs to “Restless & Wild”, the first of many vintage tunes in the setlist. Much of the show, the four (backed by drummer Chris Williams, on a two foot riser) will stand four across the front, the trapezoid cutouts, made to resemble futuristic steel panels, keep everyone crushed forward. It’s deep blue hues for the start of “London Leatherboys”, eternally ageless Peter Baltes and the two guitars, center stage, as Tornillo relocates to his left. Hoffman, always pulling faces for the photographers and crowd, also starts “Koolaid”, walking about the purple/blue stage, the drums quickly locking in to the beat. Come the solo, the singer air guitars, next to the real thing, stage left. Williams’ cannonading drums kick in, at the beginning of “No Regrets”. The pair of guitars trade licks center stage, as Tornillo gets the audience to singing, their hands overhead, side-to-side. The singer is the star of somewhat autobiographical “Analog Man”, which is followed by red/white lit “Final Journey”, with fog seeping out of each trapezoid. Following the guitar break, cheerleader Baltes leads a clap-along. Mark asks if people are staying warm, as it’s now possible to see your breath. “Pumping that antifreeze?” He knows all too well some are, all too well! Time for singing, so enter “Princess Of The Dawn”, the titular chorus sung by thousands. Pink lights for “Midnight Mover”. Speaking of movement, as fog again billows from atop each “steel” monolith, Tornillo maneuvers his way to the right wings and toys with Lulis, the mainstay Hoffman-Baltes pair across the stage. White searchlights sweep the icy blue stage for “Up To The Limit”, the two guitarist sway in unison, the bassist perched on the one-step-up riser. All reconvene, down front, bobbing and a half turn, in sync. A red drenched “Pandemic” culminates in Hoffman cranking away, going mental, center stage. The Tyrolean chant “hi de hi do” (or should that be Heidi?) sees only the Americans: singer and drummer onstage, the Germans charging on as “Fast As A Shark” is launched. Dueling hammer-ons for this speedster. “Metal Heart” begins with Hoffman, guitar and free hand outstretched overhead. The “whoa whoa” sing along ends with a big crescendo. Pulsating blues and white for “Teutonic Terror”, while Wolf alone is spotlighted for climactic “Balls To The Wall”. More old school synchronized moves from Peter and Wolf on this exaggerated rendition, Williams standing as be pumps out the trademark rhythm on his kick drums. It ends with matching windmills all around, even from the instrument-less Tornillo. Accept still delight.

For the full review visit: