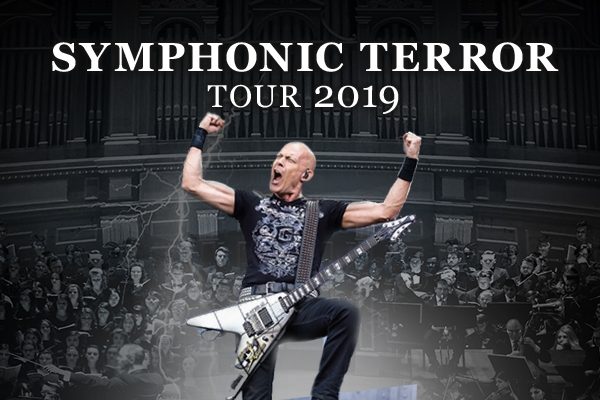 When Mozart’s 40th Symphony is heard on Easter Saturday in the venerable Stadthalle in Wuppertal, it will be ACCEPT rocking the Hall in a classic way – with Mozart, Beethoven and Grieg.

Guitarist Wolf Hoffmann, one of the most famous sons of the city on the Wupper – “next to” Friedrich Engels, Johannes Rau or Horst Tappert – is back in his homeland.

In 1976, when he was only 16 years old, Wolf Hoffmann became lead guitarist of ACCEPT – and it has remained until today. And finally, he can bring his love for classical music full-length on stage, together with the “Orchestra of Death”. Behind them is the Czech National Symphony Orchestra, famous for its work with superstars like Sting or composer Ennio Morricone.

The premiere of the show in 2017 was at the most important heavy metal festival in the world, the legendary Wacken Open Air. The resulting DVD SYMPHONIC TERROR was released in November 2018 – a bestseller.

Now Wolf Hoffmann chose his old hometown Wuppertal as the starting point for the “Symphonic Terror” Tour. For a reason: Only a Plektron throw next to the Stadthalle is the even venerable Wilhelm Dörpfeld -Gymnasium, where Wolf learned Latin, took music lessons and graduated high school. Much to the grief of his parents he spurned the university, preferring to pursue a career as a rock star in cowboy boots and long blond mane.

To celebrate the tour launch on April 20 in Wuppertal , ACCEPT will release a special 7 “vinyl single the day before, featuring on the A-side the brand new and previously unreleased song ‘Life’s A Bitch’ , while page B features ‘Restless And Wild’ (Live At Wacken 2017) is coming up.